Five late-stage Alzheimer's disease candidates, three of them monoclonal antibodies, are projected to rack up big sales when they launch, according to a new report by Datamonitor Healthcare. Like the rest of the AD drug market, growth for these products will come from treating earlier stages of the disease (article free with registration).

Sales of Alzheimer’s disease drugs across the US, Japan and five major EU markets (France, Germany, Italy, Spain and the UK) totaled $3.1 billion in 2015. By 2024, the AD market is forecast to reach $12.6 billion, a compound annual growth rate (CAGR) of 16.83%, according to "Alzheimer's Disease Forecast," a new report by Informa's Datamonitor Healthcare analyst Maha Elsayed, PhD.

The US is the largest major market for Alzheimer’s disease drugs, with an estimated 2015 value of $1.75 billion. The large US patient population and the high volume of annual prescriptions (2.72 million in 2015) contribute to its size, as do the premiums that companies charge for their AD drugs. For example, Eisai Co. Ltd./Pfizer Inc.'s Aricept (donepezil) carries a 2015 ex-manufacturer price of around $2,256 per year in the US compared with annual prices of $839 in Japan and $199 to $640 in the five major EU markets. US prices are expected to further increase during Datamonitor's forecast period of 2015–24, whereas prices in Europe and Japan will mostly either decline or remain stable, particularly once exclusivity has been lost.

As we noted in In Vivo a few months ago, as drug development shifts toward treating early-stage, prodromal patients, the Alzheimer's market will expand considerably and much of that growth will be driven by the anticipated availability of expensive, late-stage immunotherapy candidates. (Also see "Alzheimer's Disease: Defusing The Bomb By 2025" - In Vivo, 18 May, 2016.)

The amyloid-based immunotherapies aducanumab (Biogen Inc./Eisai), crenezumab (Roche) and solanezumab (Eli Lilly & Co.), expected to launch during 2017−21, have the potential to grow the market by $9.3 billion in annual sales by 2024. Should aducanumab demonstrate similar efficacy in its Phase III trial as in its Phase Ib PRIME study, it is expected to be the market leader ($4.08 billion), followed by solanezumab ($4.05 billion) and then crenezumab ($1.17 billion). (See Exhibit 1.) These drugs will be prescribed alongside existing therapies, although their uptake will be hindered by their high price points: amyloid-based immunotherapies are expected to be priced in line with leading biologics for inflammatory indications, equivalent to 13 times greater than Aricept in the US. As such, Datamonitor Healthcare forecasts that around 540,000 patients with prodromal or mild Alzheimer’s disease will receive immunotherapies by 2024 in the US, Japan and five major EU markets.

Note: Launch date and estimated sales for US, Japan, France, Germany, Italy, Spain and UK. Sales projections for crenezumab, idalopirdine and RVT-101 do not include Japan.

Despite the Phase II failure of Pfizer's serotonin 5-HT6 antagonist PF-05212377, Datamonitor projects that two other candidates in that class (Lundbeck Inc./Otsuka Pharmaceutical Co. Ltd.'s idalopirdine and Axovant Sciences Ltd.'s RVT-101) may have an impact during the forecast period, with potential market values of $648 million and $865 million in 2024, respectively. (Also see "Full Monty On Pfizer’s Failed 5-HT6 Alzheimer’s Drug Leaves Hope For Class" - Scrip, 25 Jul, 2016.) RVT-101 is forecasted to capture a higher market value, given its improved efficacy profile. These symptomatic pipeline drugs are forecasted to generate smaller market value than immunotherapies because there is less clinical need for them, and their uptake may be hindered by the widespread availability of generic symptomatic competitors. Furthermore, unlike amyloid-based immunotherapies, they are not expected to command premium pricing.

Products for treating the earlier stages of Alzheimer’s disease are expected to have the greatest growth potential from 2015–24. Datamonitor Healthcare forecasts that the market for prodromal and mild Alzheimer’s disease will grow at CAGRs of 22.21% and 28.72%, respectively. By 2024, the AD market will be changed considerably, with sales of drugs for the earliest stages of disease accounting for 86.15% of the total. 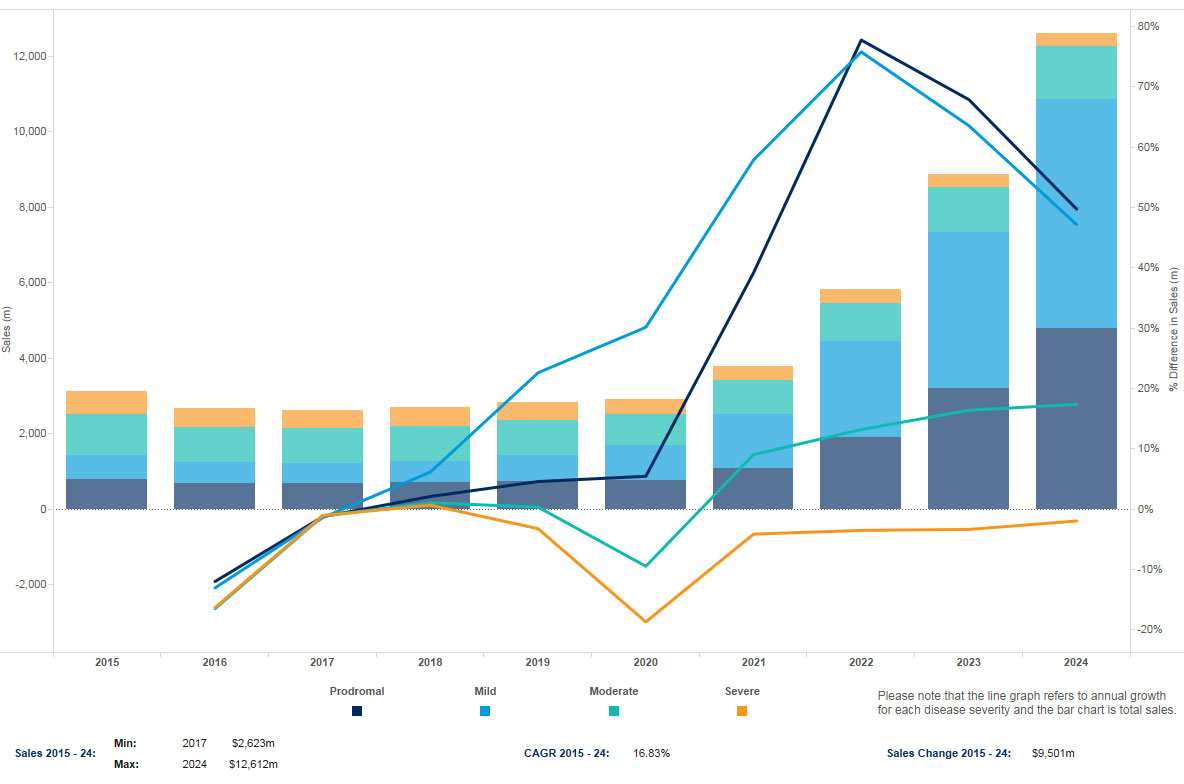 Unlike aducanumab and crenezumab, solanezumab is expected to be indicated initially for mild Alzheimer’s disease, based on the design of the clinical trials. However, Datamonitor Healthcare believes that physicians will be willing to prescribe solanezumab in earlier, prodromal patients given the potential utility of immunotherapies in this population, provided that prodromal AD can be accurately diagnosed. The availability of amyloid-beta positron emission tomography (PET) imaging and the likelihood of reimbursement, should there be sufficient therapeutic justification, would support identification of the early stages of the disease and treatment accordingly. There will be a rapid expansion of the value of these indications starting in 2018. (See Exhibit 2.)

The market for treating moderate Alzheimer’s disease is only expected to grow at a CAGR of 2.74%, with fewer new drug approvals in this population, and no appropriate disease-modifying therapy. On the other hand, the market for severe Alzheimer’s disease will decline at a CAGR of –5.98%. With no new drugs approved in this population, the severe AD market becomes especially vulnerable to the ongoing brand erosion by generics.

Alzheimer's Disease: Defusing The Bomb By 2025