The ups, downs – and nearly outs – of ASX-listed health technologies manufacturer and distributor Admedus have made compelling reading in the past two years, but CEO Wayne Paterson has brought a competitive edge to a company that was lacking focus. Now he is looking to raise the bar again, aiming to use the company's proprietary Adapt patch technology in the TAVR space, while also pressing on with strategic plans for the therapeutic vaccines portfolio and adding scale.

There's nothing slow about the pace of change at Australian registered Admedus Ltd., owner of the bovine pericardium patch technology Adapt and the CardioCel suite of branded products; at least not since Wayne Paterson decided last year to double up his chairman role and become interim CEO.

As previously noted in In Vivo, Paterson was installed as temporary CEO to develop the sizeable opportunities that the company's owners thought were being missed under the previous incumbent: chances were not being taken to develop the firm's triple portfolio platform of unique bovine pericardium patch technology, HSV and HPV 2 therapeutic vaccines, and medical pumps distribution business. (Also see "How To Restructure: Admedus Opts For A Restart" - In Vivo, 19 Dec, 2016.)

The idea was that Paterson would identify and employ a new CEO, training him/her up to exploit the potential that he sees so clearly in Admedus. Then he would move fairly briskly back to board duties. But finding the right executive has been more challenging than Paterson assumed this time last year, so in February 2017 he decided to take on the role full time himself, and employ a new chief operating officer to train up and eventually give way to. 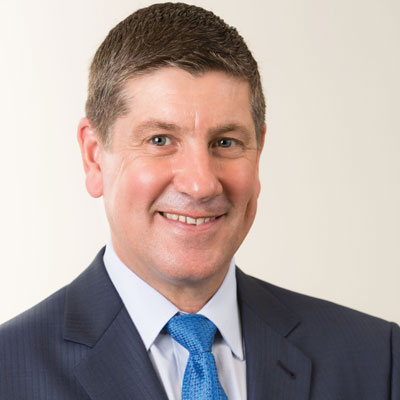 CEO candidates were either on a too-lofty package, or were "three levels below what was needed," with no immediate prospect of managing territories like Europe or the US, Paterson observes. In the end, he opted for stability – as demanded by the market – and took a three-year contract. "I really didn't have a whole lot of choice, until I de-risk the company further with regard to individual career prospects," he says.

The new COO, David St. Denis, started on July 1. He had worked with Paterson for some 10 years while at Merck, on emerging markets and when Paterson was president of the Europe market.

Failure to find a CEO has been one of the unexpected frustrations for Paterson, and another has been the slower-than-expected (in some quarters) development of the therapeutic vaccines into market-ready technologies. Elsewhere, positive things are happening in the P&L and on the balance sheet, and in the CardioCel/Adapt franchise – in the aortic arch repair and potentially even in TAVR, Paterson tells In Vivo.

Meanwhile, the company's pumps distribution business may be augmented by new in-house technologies; this business remains Admedus' biggest sales contributor – but not for much longer, Paterson believes.

New Future For Admedus Immunotherapies? – Not Yet

Admedus is mulling over the future of its vaccines business.

On July 4, Admedus launched its aortic arch patch more broadly to selected reference centers. A limited number of sites have been using the product pre-launch both in the US and Australia. CardioCel 3D for pediatric use is a unique product that bucks the notion that tissue patches must be flat. So far, no one has achieved a three-dimensional patch that curves at scale. Admedus has the advantage of the manufacturing process that Adapt can provide, giving the tissue the unique property of allowing it to be shaped around a mold, besides its well-documented anti-calcification and anti-inflammation properties.

Paterson says pre-market launch demand for the first 3D pediatric patches has been "stunning," but he is taking a measured approach to the launch and wants to gather more data from the trial centers and use cases before proceeding further. "We need to be cautious and sell this properly," he says, displaying his trademark "drug industry caution." Only Admedus' direct sales reps will have access to it.

FDA 510(k)-approved in early May, CardioCel 3D is registered in the US only, but EU launches will follow in six to nine months. The only alternative is cadaveric homograft material, which Paterson describes as hard to get and expensive. Encouragingly, three of the global top five children's hospitals – Boston, Dallas and the Royal Melbourne – are trialing it.

Admedus is confident of increasing sales to A$21 million in 2016–17, as promised under the "Code Red" – a complete review and restructure of the business that Paterson instituted. He says strides are being made at last: the previous quarter was cash flow neutral for the first time, and cash burn halved to A$2.5 million for the quarter.

3D will likely be the key product from Admedus: "It proves the point, and no one else can do this." – Admedus CEO Wayne Paterson

Importance Of 3D To The Group

Paterson thinks 3D will be strategically very important in bringing something of a "halo effect," where the company starts getting more inquiries about VascuCel, CardioCel and CardioCel Neo. 3D will likely be the key product from Admedus. "It proves the point, and no one else can do this. Demand from the doctors is pent up, and we've got good clinical data."

CardioCel Neo is next on the list in terms of commercial importance, even though it's a limited supply product that needs to be separated out at the manufacturing stage. At some point CardioCel regular may become a price play, and the other main brand, VascuCel, is a relatively low-process product that is aimed at older patients. In true drug industry fashion, Paterson has set up special product focus (SPF) sales teams in a bid to get more traction in the VascuCel market.

Untypically for a device company, Admedus uses IRR metrics to measure sales performance. It also uses the Veeva CRM to track reps' productivity. In fact, a lot of the company’s techniques borrow from pharma, because, as Paterson sees it, "This is basically a pharma sale, based on clinical information/superiority, competitive positioning, strategy implementation and delivering patient outcomes." Although Admedus has a clinically superior product, it does not “sell itself,” Paterson says. "Implementation – measured and tracked – is the difference between success and failure."

Post-restructure and Code Red, Paterson thought Admedus would be making waves in the market by spring 2017. He explains that one (undisclosed) rival was starting to lose market share to Admedus, which in May 2017 led first to brokers pitching for Admedus to make an equity investment in the company, and second to the company itself actively soliciting its acquisition by the Australian firm.

Admedus also seems to have ruffled feathers in the vascular space, and has reportedly put out another competitor, which had succeeded in taking market share after Baxter International Inc. made its Vascu-Gard patch recall in fall 2016. (Also see "US FDA Warns Of Severe Bleeding, Hematoma Risks With Baxter Vascu-Guard Patch" - Medtech Insight, 2 Sep, 2016.)

"TAVR devices are starting to experience calcification, which is a perfect storm building for us." – Wayne Paterson

Moving Into The TAVR Space

Admedus is going beyond patches, however, and is targeting TAVR (trans-aortic valve replacement). Its project has been ongoing for some six months, and if it comes through, it will be the archetypal game changer, in Paterson's opinion. "It's progressing quickly. TAVR has been around for about five years, and anecdotally, devices are starting to experience calcification, which is a perfect storm building for us with our clinically superior tissue and Adapt manufacturing process to make the tissue more flexible."

Admedus has made several patent applications and wants to get to a higher number by the end of the year. TAVR is a $5 billion space, 80% of it owned by Edwards Lifesciences Corp.and Medtronic PLC. The devices reach $30,000 each and it is a growing sector.

"We can build a whole TAVR. We've got a prototype. But it would have to be a co-promotion, co-development deal with one of the big companies." Paterson has his eye on a candidate, a large firm sitting on the edge of the space, having tried already to get in. He plans an approach in first-quarter 2018, and expects a deal to be done very quickly.

Admedus' tissue now has 10 years of data that show that the company has been able to get rid of most of the calcium binding sites, not an easy thing to achieve. There's more too, as Admedus looks to mitral valves.

More Changes Afoot As The Pace Heats Up

FDA approval of CardioCel 3D pushed shares up, and although the price remains sensitive to events, Admedus now has its eyes on acquisitions, where they make sense, and has been very close at times. Paterson says it is likely that one will be made in the next 12 months, for scale.

Admedus has made a focus of countries that won't accept FDA or overseas sales approvals, China and Brazil, for instance. In China, a huge market for CardioCel, it has found a partner and identified the protocol needed to run trials and get results. Brazil is at an earlier stage, as is Mexico, but Indian approval is expected in September, and a new distribution deal locally means first sales there will be made in December 2017.

Elsewhere, Admedus is considering a US Nasdaq listing. Paterson is also mulling whether the company is just a little too transparent at present. He is also concerned that Admedus has made itself a takeover risk now, give its trajectory to becoming a $1 billion market cap firm.

Internally, the financial year-end is being changed to December, meaning an exceptional six-month trading period after the June 30, 2016 year-end. The group made a loss of A$25 million in 2015–16, but a move into profitability is expected by the end of 2018. "I'm confident of that, and CardioCel 3D might accelerate it," states Paterson.

Paterson says the changes wrought at Admedus since the Code Red have had purely beneficial effects. "We grew up as a company. We've taken the randomness out of how money is spent and have become more disciplined. We've put in systems, metrics, processes to manage cash, sales and everything in between," says the CEO.

He adds: "It's now a corporation you can manage. Survivability was the first priority. We now need to convince KOLs about the science, and build the rep numbers." With CardioCel 3D and, later, TAVR, the science is now proving itself, but as Paterson says, "Being merely clinically superior is not enough."

How To Restructure: Admedus Opts For A Restart