It is time for In Vivo's 12th annual Deals of the Year contest. We've selected 15 nominees in three categories – Top Alliance, Top Financing and Top M&A – and you get to pick the winners. 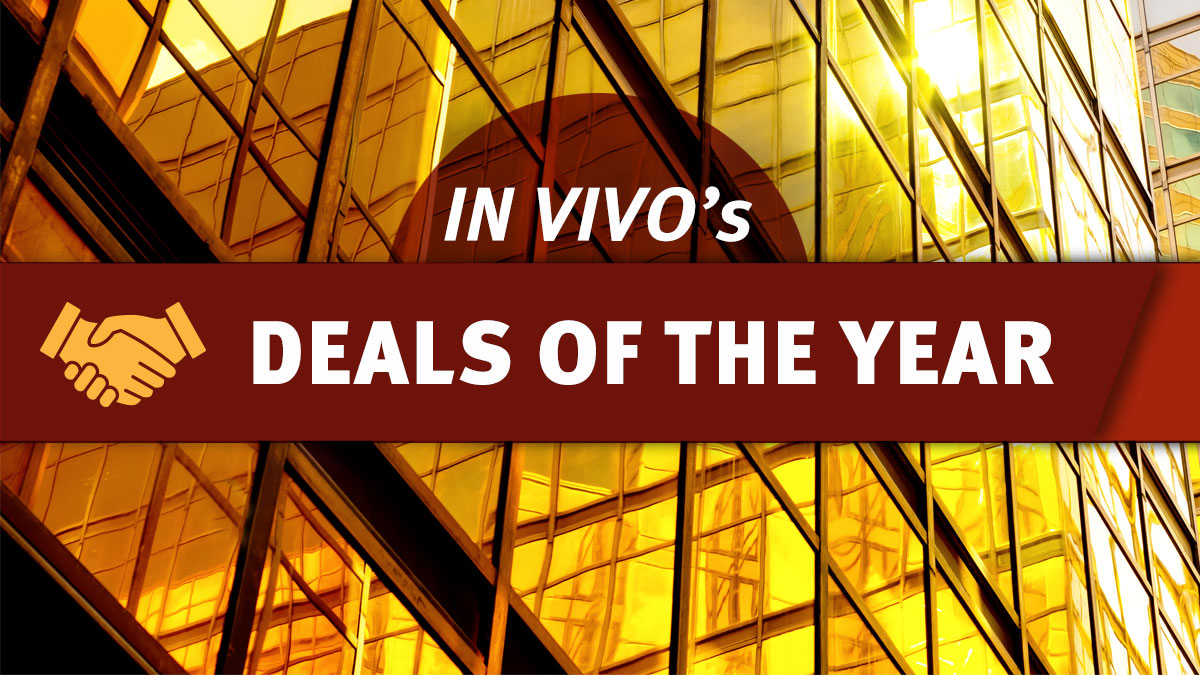 In Vivo's editors, along with experts from the Informa Pharma Intelligence team, have selected our top five picks for the most significant alliances of 2019. Vote for your winner in the poll.

At the close of 2019 Sarepta Therapeutics licensed ex-US rights to its Duchenne muscular dystrophy (DMD) gene therapy SRP-9001 to Roche, a deal that eventually will bring the company more than $10bn in benefit. Initially, Sarepta gets $1.15bn under the deal announced on December 23 that, when combined with cash on hand, will give the company $2.5bn to advance its plans for being a global gene therapy leader.

On October 31, Amgen announced the acquisition of a 20.5% stake in Beijing-based BeiGene Ltd. for $2.7bn in cash, exemplifing pharma’s stepped-up investment into the Chinese pharmaceutical market. As part of the transaction, BeiGene will commercialize three Amgen products in China including Xgeva/Prolia (denosumab), which is already approved in the country, and two others – Kyprolis (carfilzomib) and Blincyto (blinatumomab) - which are under Phase III development in China. In addition, BeiGene will take charge of China development activities for 20 Amgen preclinical molecules. All together, BeiGene will set aside $1.2bn for the development costs of the candidates, which might also include Amgen's KRAS mutation-targeting drug AMG510. Through the investment in BeiGene, Amgen could launch some 20 oncology products in China from its pipeline, playing into fast-growing market opportunities. SC126124

Also in October, Novartis announced that it was setting up a dedicated AI innovation lab and had chosen tech giant Microsoft to be its strategic AI and data science partner. The five-year collaboration will involve projects across the business, helping to transform not only drug discovery, where AI’s computing power has the most obvious applications, but also in drug development and in commercial activities. The alliance will start with a few targeted projects: helping to develop personalized therapies for macular degeneration and projects in cell and gene therapy and drug design. More broadly, the alliance will focus on two core objectives, called AI Empowerment and AI Exploration.

In April last year, Gilead Sciences announced a collaboration with start-up Insitro, which will use its proprietary drug development platform to optimize up to five targets for potential NASH therapies. In tandem with the deal, South San Francisco-based Insitro – a brainchild of Stanford researcher Daphne Koller – raised more than $100m in a series A venture capital round. The biotech’s Insitro Human (ISH) platform applies machine learning, human genetics and functional genomics for in vitro modeling and drug discovery and development. Under the three-year collaboration, Insitro will get $15m up front and can earn near-term payments up to $35m pegged to operational milestones. It also can earn up to $200m apiece for each target in preclinical, development, regulatory and commercial milestone fees, along with tiered royalties on net sales of any product reaching market. Insitro also gets the right to opt in on development and detailing in the US of any commercial product; the deal includes a profit-sharing provision for China. Gilead anticipates that the ISH technology will offer insights about NASH disease progression, suggest novel therapeutic targets and help predict how patients will respond to various therapeutic interventions.

GlaxoSmithKline’s return to the oncology space was confirmed in 2019 by the UK major making a hefty €300m up front payment to get access to Merck KGAA's bifunctional immunotherapy M7824 (bintrafusp alfa). M7824 has been designed to simultaneously target two immuno-suppressive pathways – transforming growth factor-β (TGF-β) trap and an anti-programmed cell death ligand-1 (PD-L1). The aim of the bifunctional antibody is to increase efficacy above and beyond that achieved with individual therapies or combinations. In addition to the €300m up front sum, Merck is eligible for potential development payments of up to €500m and future approval and commercial milestones of up to €2.9bn. The total potential deal value is up to €3.7bn and all profits and costs from the collaboration will be shared equally on a global basis.