Is Now The Time To Build In China?

Deciding whether to build or rent development and commercial capabilities in China requires a deep understanding of the changing Chinese market. Individual product characteristics, and a management team’s tolerance for risk, should be used to determine which model can deliver the best results. 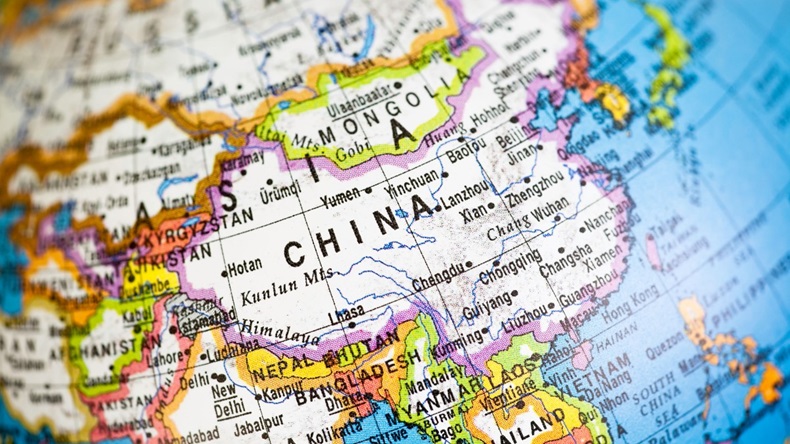 China’s pharmaceutical market has grown from $25bn in 2000 to $180bn in 2020, a magnitude and velocity of growth unparalleled in pharmaceutical history. Today, China market strategy is on the board of directors’ agenda at every biotech and pharma company. The question is not whether to go to China, but how? How to balance the opportunities and risks? How big is the real opportunity and is it sustainable? And should we build in China or rent local capabilities to realize that opportunity?

To this critical question, history in the last twenty years has been clear: fully integrated pharmaceutical companies have been building in China while R&D stage biotechnology companies have been renting.  There are good reasons behind this divergence of choices; it takes tremendous, hyper-local effort to chase after success, and it is particularly hard for organizations that do not yet have commercial capabilities in mature markets, like the US, Europe and Japan.

The evolving regulations on drug development and approval, the vastly different pricing and reimbursement system and a mercurial commercialization culture are among the key challenges for a company new to China. However, the Chinese market continues to march on, occasionally halting, but inevitably growing, with the inherent unmet medical needs of 1.4 billion people beckoning the western drug companies. Many recent positive reforms by the Chinese government provide growing evidence for biopharma companies to prioritize the China market in its commercial expansion strategies.

Starting in 2015, China implemented a series of major reforms in drug approval, including: acceptance of clinical data from global trials; allowing Phase I trials in China by foreign companies; and alignment of regulatory review processes and timelines with international standards. In the latest Drug Registration Management Regulation issued in March 2020, China introduced an accelerated NDA pathway for breakthrough therapies, which requires only partial Phase III clinical trial data with “enough cases” to demonstrate the efficacy of the therapy. As a result, this breakthrough fast-track NDA only takes around 130 days for approval, as opposed to up to a year under a standard NDA pathway.

The slow update of the National Reimbursement Drug List (NRDL) had long been a challenge for pharmaceutical companies until 2017 (see Exhibit 1). The 2017 NRDL (4th edition) introduced a rolling principle in the form of a “to-be-negotiated” list for innovative drugs addressing urgent clinical needs, establishing a dynamic review process. This bi-annual NRDL update process was further accelerated into an annual process in 2020, opening access of innovation to virtually the entire Chinese population. 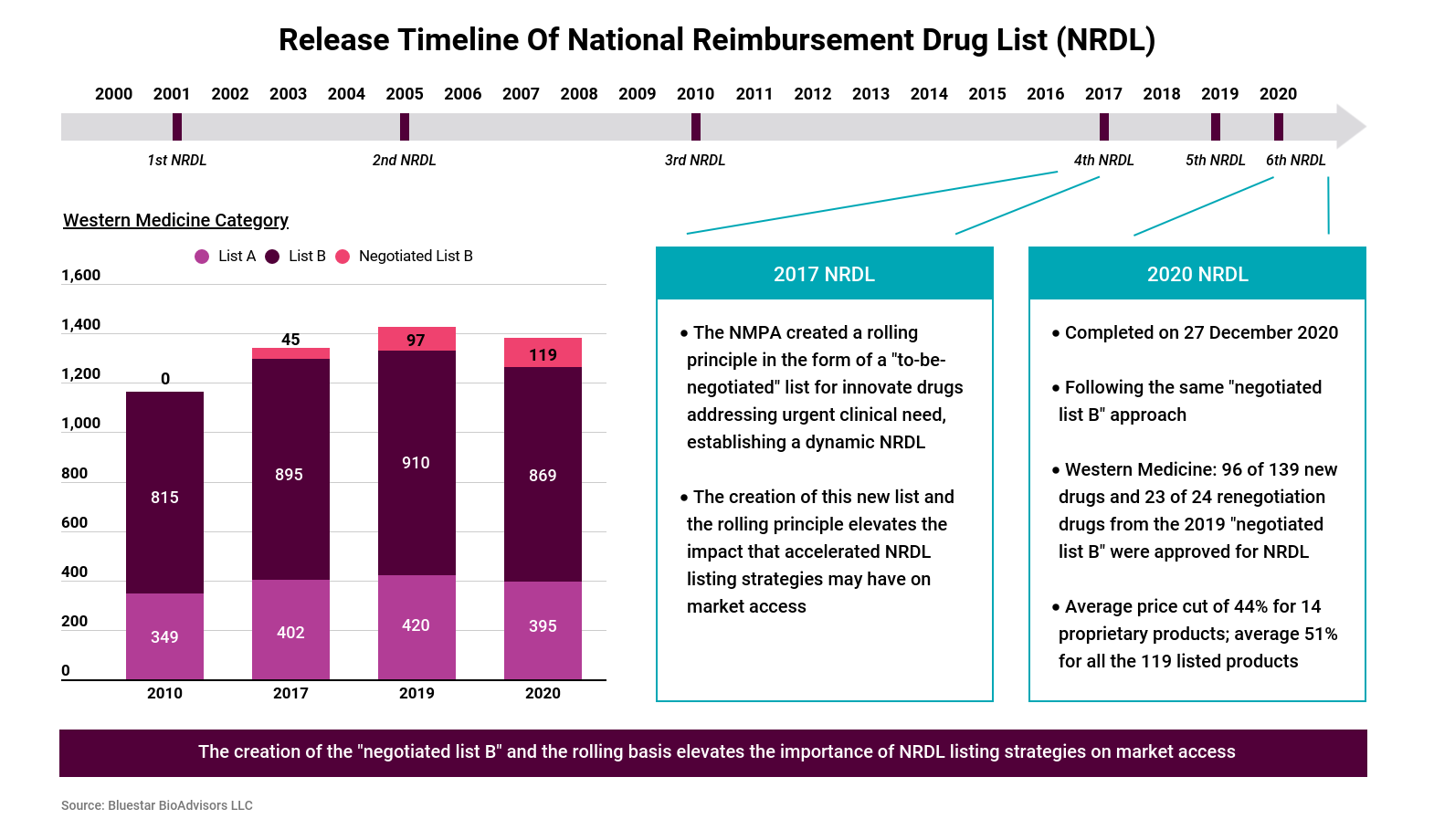 When deciding on a market entry strategy in China, there are pros and cons for both the “rent” and the “build” models.  The key to a successful strategy is developing a true understanding of the China market in order to identify a customized approach that balances risk and return.

While the contract research organization industry in China has gained rapidly in its experience and is today a reliable partner for biopharmaceutical companies, the individual case experience can still vary substantially. Given the significant distribution imbalance of health care resources among Chinese cities, physicians at leading hospitals are often overworked and constantly struggling with allocation of time between clinical care and research.

Building strong relationships with local KOLs and CROs is critical for foreign biopharmaceutical companies before they hand over their precious assets for trials in China. Building a local clinical and regulatory team with strong experience in clinical studies, and interfacing with the National Medical Products Administration is an essential step.

How To Set the Pricing And Reimbursement Strategy In China?

The introduction of NRDL negotiation has aggressively driven down innovative drug costs since 2017.  The latest round of negotiation in 2020 continues the trend of substantial price discounts.  Based on the latest NRDL list, it appears that a 50% discount is the bar for negotiations with the central government.  In order to execute a successful NRDL listing strategy, a foreign drug maker needs to form an early alignment on the China pricing strategy across its global and local teams.  In the long run, it appears that NRDL will become the most viable pathway to achieve rapid and broad market access in China.

How To Gauge The Commercialization Requirement?

As a result of the hospital-based health care system, drug sales in China have historically been hospital-based.  Mapping out the customer footprint is the first critical step; how many hospitals and which cities should be targeted? Beyond the sales force focus on clinicians, distribution channel is also a critical factor. There have been continued government policy goals to separate drug sales from the hospital channels, particularly for specialty drugs like oncology and rare disease drugs.

There have been centralized pharmacies set up in many cities to consolidate the distribution of such drugs. These changing trends require companies to shift their distribution strategy and capabilities; companies need to build strong relationships with city-level distributors, and perhaps even consider building their own distribution capability for specialty drugs.

How Much Control Should Come From US Headquarters?

Cross-border businesses are always hard to manage, regardless of whether you are working with a licensee or a Chinese satellite team.  The market dynamics and cultural differences can create extra need for dialogue and communication, which adds further strain to the cross-border business model.

These are some of the challenges western companies should consider when choosing between “rent” and “build” models in China. Ultimately, however, each company must weigh the pros and cons based on its own strategic goals (see Exhibit 2).  A “rent” strategy may look attractive in the short-term for a company looking for accelerated development and an infusion of cash to support its US operations, but a “build” model could eventually lead to in-house clinical and commercial expertise that lays the foundation for long-term success in the second largest pharmaceutical market in the world.

In evaluating the decision to build in China or not, it is important to recognize that “build” doesn’t mean building every part of the value chain. Also, “build” can change to “rent,” and the progress made with “build” can accelerate success in the eventual “rent” model. A tailored strategy is needed for each drug based on an understanding of the drug’s regulatory and competitive landscape.  That knowledge should guide decision-making on which pieces to “build” versus “rent.”  Here, we can look back into history again for inspiration and rationale.

Fibrogen was the first US biotech that committed to building a full value chain in China. They started the manufacturing facility build-out in Beijing back in 2012. Part of the rationale was that China’s regulatory policy then required a local manufacturing facility as a pre-requisite for Class 1 status-- a fast and prioritized drug registration process – for new molecules which have not been approved anywhere in the world.

After nearly ten years of hard work in China, the company reaped the benefit.  Roxadustat, a hypoxia-inducible factor prolyl hydroxylase (HIF-PH) inhibitor, received Chinese regulatory approval in 2018 for renal anemia (and subsequently for non-dialysis patients in 2019), before it is approved in the US or anywhere else.  Roxadustat became the first new molecule approved in China as a first market.

Assembly Bio is developing a suite of small molecules to treat hepatitis B (HBV). With 90 million carriers, China represents the biggest market for HBV. In this situation, a China strategy was essential for the company; staying close to the market through engagement with KOLs and development experts was crucial. Assembly built a small team of regulatory and business development managers in China. They were able to file an Investigational New Drug (IND) application in record time, and put the development program in place while fielding interests from potential suitors. In 2020, BeiGene acquired the Chinese market rights for Assembly’s HBV program.

Bayer, which built a full pharmaceutical team in China in 1994, still needed to rent some core capabilities to support its nuclear medicine product Xofigo (radium Ra 223 dichloride), due to the hyper-regulated nature of nuclear medicine in China. Bayer outsources customs clearance and distribution within China to the China Isotope & Radiation Corporation, who has a specialized, nationwide radiopharmaceutical transportation and distribution network.  Bayer manufactures the drug in Europe, and its China team handles the marketing and sales. Xofigo was approved in China in 2020.

Foreign investment is prohibited in gene and cell therapy research, development and applications in China, according to the Special Administrative Measures (Negative List) for the Access of Foreign Investment (2020). To access the Chinese gene therapy market, US companies will have to license out their products and services to a Chinese local partner.  If a US-based company was set up or merged with companies located in China, the US-based company may be allowed to invest in companies related to the holding company in China. Furthermore, US companies can try to build their own branches or JVs in Hong Kong or Macau, in accordance with regional regulations.

With ample funding from Chinese and international VCs, and the return of R&D talents, many emerging Chinese companies in the last five years have leveraged the bi-coastal model.  These companies typically have R&D in both China and the US, often with manufacturing facilities in China for the lower cost advantage, and business teams in both China and the US to facilitate business development in both countries. As the Chinese domestic biopharmaceutical companies upgrade from “me-too” portfolios to “first-in-class” aspirations, we are bound to see more of such bi-coastal companies. They offer strong local expertise and can become partners in the “rent” strategy for western companies, but also potential M&A targets in the “build” strategy. As Chinese companies, they can avoid regulatory restrictions in segments listed in the Negative List for the Access of Foreign Investment, such as gene and cell therapy.

To Build Or To Rent

China is a must-have market for biopharma companies now. Yet, it is also fraught with risks, and the recent (and sweeping) government policy changes pose a stark reminder of how fast the environment can change. The choice of “build” versus “rent” in China comes down to two key considerations: specific product and market requirements; and a management team’s ambition and risk tolerance.

For most western biotech companies whose internal expertise regarding the China market is limited, and value creation primarily focuses on US and EU market execution, it is a reasonable choice to “rent” over “build.”  In this, history has provided ample evidence to support that choice.  However, assuming that modern China weaves and pauses but inevitably moves forward – and its pharmaceutical market catches up to the US, just like its GDP will within the next 10 years – a long view approach of “build” becomes a valid strategic option. For the management teams contemplating this choice, evaluating the hybrid model and what and when to build is a worthy exercise to undertake.

Insmed CEO On Innovating To Compete In Rare Disease

Twist's Unconventional Approach, Adding Value One Rung At A Time