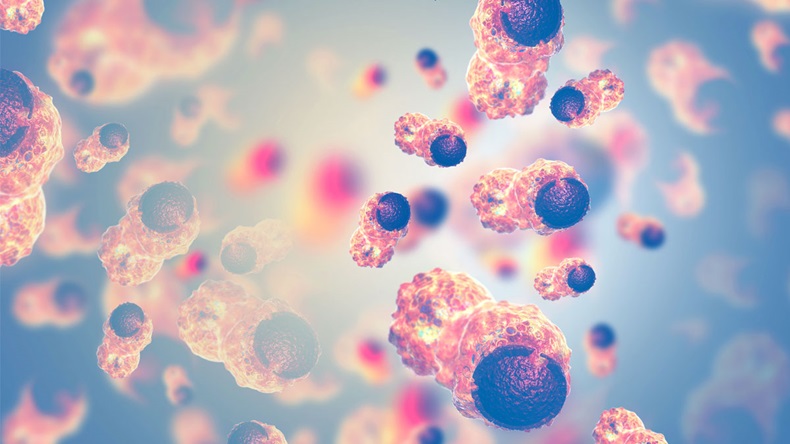 IO based on PD-1/PD-L1 checkpoint inhibition is firmly established in the first-line treatment of many solid tumors (with the notable exceptions of breast and colorectal). IO is continuing to push into earlier stages of diseases, which hopefully will make a positive impact in overall survival. “It’s exciting to see the progression of these therapies from several years ago when they entered the market in the metastatic setting,” noted Rachel Laing, managing director at Bionest Partners. Trials in early-stage cancer come with longer timelines and often larger sizes, so the fact that companies were confident to pursue these indications was encouraging, she said.

Companies pursuing new IO targets have caught the interest of biopharma, with candidate compounds including bispecific antibodies (bispecs) and chimeric antigen receptor T-cells (CAR-Ts). More than half of the 18 alliances with upfront payments of at least $20m that big pharma and large biotechs entered into in 2021 to in-license oncology assets were IO-related, according to Biomedtracker (see Exhibit 2). Twelve of the 18 were for preclinical programs. Drug developers are also moving ahead with a slew of antibody-drug conjugates (ADCs).

Oncology is the biggest engine for biopharma R&D and also the fastest growing. Of the more than 6,000 product candidates in active development, up 68% from 2016, oncology accounts for 2,226 compounds, or 37% of the total, according to IQVIA’s November 2021 Global Outlook Report. The oncology pipeline has more than doubled since 2011. There were 930 products under development in 2021 for rare cancers, representing 42% of the total. Helping fuel that growth, the use of predictive biomarkers has been increasing steadily over the past 10 years, and now includes at least three-quarters of the oncology pipeline.

In total, seventeen of the 60 novel drugs and biologics approved by the FDA in 2021 were cancer treatments, as are one-third of the 45 agents under FDA review with 2022 user fee goal dates (see Exhibit 3). (Also see "Broader Horizons For Advanced Biotech In 2022: New Targets, Settings For IO, Cell And Gene Therapy" - Pink Sheet, 31 Jan, 2022.)

IQVIA projects that oncology will continue to grow at a 9-12% compound annual growth rate, limited mostly by providers’ budget constraints. One hundred new treatments will enter the market over the next five years, according to the Global Outlook Report, which will contribute to an increase in spending of $119bn, to a total of $306bn in 2026. That is more than 75% above the spend in the next-largest therapy areas, immunology and diabetes treatment, which are expected to reach $178bn and $173bn, respectively, in 2026. Cell and gene therapies, which include CAR-Ts in oncology, have reached about $5bn globally. And this figure is likely lower than the real total as some products are directly distributed; IQVIA data are collected primarily from wholesalers, dispensing pharmacies and dispensing hospitals. That number could quadruple by 2026, with the caveat that projections could run significantly higher or lower because of safety risks and the pace of clinical trials and regulatory reviews.

Oncology’s predominance in biopharma R&D is also presenting challenges. Innovation has led to increasing competition for treating a variety of tumors, Michael Kleinrock, research director, IQVIA Institute for Human Data Science, said in a recent interview. That dynamic will continue to raise questions of returns for innovators and complicate decision making for providers. Whether payers will realize savings from that competitive intensity, or will keep paying higher prices, also remains to be seen. “There seems less room for the trailing edge, the number three, four or five in a category, to make significant money,” Kleinrock said.

The increased crowding of commercial opportunities – a partial consequence of a prolonged receptive IPO market and favorable regulatory environment – was one of the factors triggering the year-long sell-off in biotech stocks that started in early 2021, analysts at Leerink Partners said in an 8 February note. Some disappointing commercial launches and unpredictable binary events, which often served more as liquidation opportunities than value-creating catalysts, also contributed, they said. The negative momentum has continued into 2022, and could continue, they believe, because of concerns around interest rate increases, which may increase the cost of capital for companies and required return on investment for investors.

The overall move to reduce investment risk in biotechnology, combined with macroeconomic factors affecting the broader markets including implied interest rate increases, inflationary pressures and other pandemic-related dynamics, have created a higher cost of capital. This has particularly impacted the targeted oncology sector, which requires capital influxes to support ambitious R&D efforts, the analysts pointed out.

“Many of the stocks have significantly underperformed, with new issues and companies with less perceived fundamental value, such as those with little or no clinical data, being the most heavily pressured,” they wrote. These factors would continue to persist in the near to intermediate term, negatively impacting price targets, they said.

By implication, it should also continue to depress M&A values. Of the fifteen $1.85bn-plus acquisitions by big pharma and large biotechs since Gilead Sciences, Inc. paid $21bn for cancer ADC developer Immunomedics, Inc. in September 2020, five were oncology-related, totaling $11.41bn, or roughly half what Gilead paid for Immunomedics. [See Deal] [See Deal] None of the deals came close to the $8bn Eli Lilly and Company shelled out for IO outfit Loxo Oncology in January 2019. [See Deal] [See Deal]

Oncology, rare diseases and neurology – the three largest segments of the R&D pipeline – all saw substantial decreases in composite success rates in 2021, according to IQVIA, continuing the trend over recent years and presumably punctuated by the pandemic. The largest segment, oncology, is seeing composite success rates of 5%. But the composite success rate for rare oncology drugs is 16%, which is more than 10x that of drugs for larger population cancers. That bifurcation is likely the result of the attractiveness of large markets: heavy competition around large population tumors on the one hand and targeting more isolated tumor populations on the other. If drug developers find a signal and a response to a compound in a rare cancer, not having a lot of competitors gives them more opportunity to serve that patient population, Kleinrock pointed out.

Tumor agnostic biomarker-driven approaches such as the measurement of microsatellite instability could add indications. “Innovators can balance the time and investment required to develop a product, with a hopefully broader patient population that spans multiple rare cancer types, centered around such a biomarker,” Laing said.

Encouragingly, clinical trial starts have recovered to a little above pre-pandemic levels, according to IQVIA data for 2021. Oncology had been more insulated than some other disease areas, Kleinrock said: cancer drug trial starts reached historically high levels in 2021, up 70% from 2015 and mostly focused on rare cancer indications. They accounted for 13% of the industry’s clinical trial subjects in 2021 and represent a 16% increase over 2020 and a doubling of the number of cancer patients engaged in clinical trials a decade ago.

Trial results in oncology are also undergoing increased scrutiny, a byproduct of the incentives offered under the accelerated approval pathway in the US. Cancer drug developers often rely on the pathway to speed development and amassing of real-world evidence. In 2021, the FDA’s Oncology Center of Excellence undertook a significant review of “dangling” accelerated approvals that resulted in the removal of 13 indications, while at the same time approving 14 novel agents via accelerated approval – a high water mark for the review pathway. (Also see "Accelerated Approval Makes Big Splash In 2021 Novel Agents, Despite Crackdown On ‘Dangling’ Cancer Claims" - Pink Sheet, 18 Jan, 2022.)

The initiative’s impact continues to be felt, signaling a continuing trend of revisiting already approved drugs in a timely fashion after approval and reexamining whether they are worthy of all their indications, in the fullness of time and evidence. In January 2022, Gilead pulled third-line indications for its PI3K inhibitor Zydelig (idelalisib) in follicular B-cell lymphoma and small lymphocytic lymphoma due to confirmatory trial enrollment challenges resulting from an evolving treatment landscape. Less than a week later, Incyte withdrew a submission for approval for its PI3K inhibitor parsaclisib.

The FDA’s push to re-examine results reflects in part the complexity of oncology drug development. Measures of productivity are lower compared to other disease areas because the pipeline is bigger, and trials are longer and more complex: it may take more time to recruit participants, a large number of sites and countries may be involved, and endpoints and exclusion criteria are complicated. But with so many oncology clinical trials, even with lower success rates, a large number of products emerge. Going forward, the use of predictive biomarkers and the increase in single-arm and adaptive trials should drive up productivity.

Wider access for innovative medicines in emerging markets, especially in China, which now updates its National Reimbursement Drug List every year, will also boost sales. In Japan, drugs are being launched earlier. As a result, many of the fruits of innovation in the 2012-2016 time period are now being used across a larger spectrum of countries. “It didn’t slow down in 2021 after softening in 2020, as I had expected,” Kleinrock said. The pandemic did create a backlog of undiagnosed patients who do not turn up for regular screening and remain disengaged – despite amplified efforts to get people refocused on screenings. “We are not seeing increased levels that would help clear the backlog,” he said. “That group will present as more metastatic and with worse prognosis.”