Improvements in generating, purifying, and delivering RNA material, as well as addressing challenges with degradation by enzymes, have made the RNA class more attractive to drug developers. 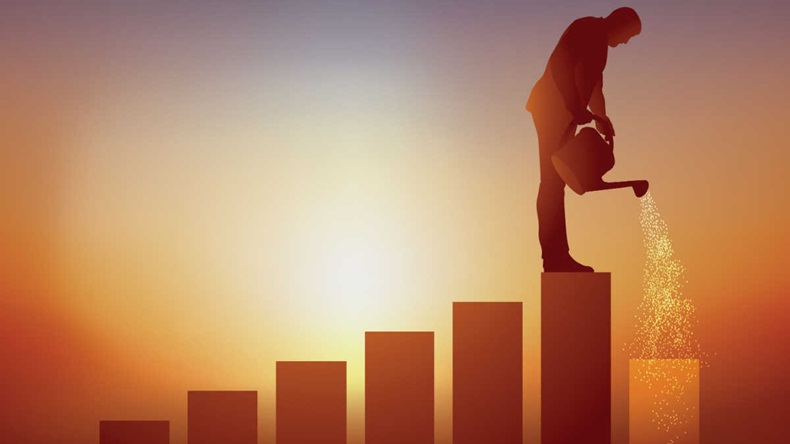 The concept of RNA as a medicine is not new. The act of using ribonucleic acid molecules to treat or prevent diseases by affecting biological pathways has been pursued for almost 50 years. Antisense oligonucleotides were first synthesized in the 1970s; aptamers first described in the 1990s; the first use of exogenous mRNA to induce the expression of a protein in vivo occurred in the 1990s; and microRNA was discovered in 1993.

These efforts and proofs of concept have been translated into actual commercial products. Since 2004, 18 RNA therapeutics or vaccines have been launched, mainly antisense and RNAi therapies. The latest approval, in September 2022, saw the EMA authorize Alnylam Pharmaceuticals Inc.’s RNAi product Amvuttra (vutrisiran) for adult patients with stage 1 or 2 polyneuropathy caused by hereditary transthyretin-mediated (hATTR) amyloidosis. FDA approval came a few months before, in June 2022.  (Also see "Alnylam’s Amvuttra To Take Off From Onpattro’s Runway" - Scrip, 14 Jun, 2022.)

Approved RNA medicines have been around for almost 20 years. But what has changed more recently are improvements in generating RNA material, as well as purifying and delivering it, and addressing challenges with degradation by enzymes. All together, these improvements have made the RNA class more attractive to drug developers. Their relatively simpler manufacturing leading to lower cost of goods, and ability to reach drug targets not previously accessed by small molecules make RNA especially attractive. According to a 2022 survey by consulting firm CRB Horizons, industry respondents say they are either planning or have already made significant investment in the short term in new RNA manufacturing capacity, and intend to dedicate a substantial proportion of investment toward large-scale production of RNA products.

Moreover, within the last two years, the investment in RNA has accelerated thanks to the rapid development and success of preventative mRNA vaccines for the COVID-19 pandemic. Effectiveness of the COVID-19 vaccines has paved the way for companies to step up resources not only toward development of mRNA, but for RNA medicines as a whole.

The number of RNA medicines in the pipeline across all modalities – RNAi, antisense therapies, mRNA vaccines and therapeutics, oligonucleotides (non-antisense and non-RNAi), and aptamers – has more than doubled since 2017, growing from 381 to 852 therapies in preclinical testing through pre-registration as of May 2022. RNA clinical trial starts have also been trending upward, including a nearly doubling of actual trial starts from 104 in 2020 to 197 trials in 2021, and 2022 seeing a healthy number of 136 trial starts as of 31 October. Companies leading the charge and most active in the pipeline include Moderna, Inc., Ionis Pharmaceuticals, Inc., and BioNTech SE.

Biopharma companies and venture capitalists have taken notice and increased investments in the RNA field through financing and dealmaking. This increased attention is expected to continue over the upcoming years, with potentials for breakthroughs emerging in the process.

Venture Investment In RNA Has Increased In Recent Years

RNA technologies have been a big driver of venture capital investment over the past five years, as VC firms look to get involved earlier in companies’ lifecycles and hope for bigger returns as these companies exit. The number of RNA company venture rounds nearly tripled in 2021 compared with the levels in previous years, reaching a total of 33 financings. And 2022 is on its way to another strong year for RNA venture financing with 22 completed through the end of October, and only needing another 11 to match 2021’s full-year total. Further, venture financing as a proportion of total RNA fundraising (including all financing types) is rising, accounting for more than half (54%) of the funding in 2022 so far, a slight increase over the 50% proportion seen in 2021.

In the last few years, some of the biggest venture rounds have gone to mRNA vaccines developers. These players were drawing attention well before the COVID-19 pandemic, a strong indication of the promise of this technology. Notably, Moderna brought in $560m in its Series G round in 2017, while BioNTech raised a combined $595m in Series A and B financings during 2018–19. That excitement has continued through the pandemic era: In 2021, Chinese mRNA vaccine start-up Suzhou Abogen Biosciences closed over $700m in its Series C financing led by Temasek Holdings and GL Ventures.

An important metric in venture financing is participation from corporate venture arms, or direct investments by pharma or biotech companies themselves, as this is another way to take a pulse of the investment interest by key industry players. RNA venture activity including corporate or biopharma investors had not fluctuated much since 2017; in fact, it was trending slightly downward through 2020. But in 2021, the number of corporate-backed RNA venture financing increased substantially with 14 rounds announced, and accounting for almost half (42%) of the venture rounds done that year. 2022 also looks to be on its way to a strong year in which nine RNA financings through October have included corporate backers. At 41%, this volume has nearly already reached full-year 2021’s proportion of RNA corporate venture rounds as a percent of all RNA venture financings.

Eli Lilly and Company has been the most active corporate/biopharma company investor over the past five years, participating in six RNA venture rounds. Alongside its corporate venture arm Lilly Asia Ventures, the combined entity has been involved in a total of 10 financings. Eli Lilly is no stranger to RNA, having signed five partnerships each worth at least $1bn since 2017. Its partners have included CureVac NV, Evox Therapeutics Limited, MiNA Therapeutics, ProQR Therapeutics N.V., and Dicerna Pharmaceuticals, Inc. (now owned by Novo Nordisk A/S), whose 2018 RNAi agreement in the areas of cardio-metabolic and neurodegenerative diseases could be worth almost $4bn if all milestones are met.

To date, Eli Lilly has joined in with investors to back three $100m-plus venture rounds. In 2019, the big pharma put in $15m toward Avidity Biosciences, Inc.’ $100m Series C financing to support the start-up’s work on antibody-oligonucleotide conjugates for myotonic dystrophy type I. Avidity went on to IPO a year later. In 2021, Lilly was part of the investor syndicate for DTx Pharma’s $100m Series B round, helping to advance the biotech’s work around the FALCON (Fatty Acid Ligand Conjugated OligoNucleotide) platform. And the big pharma joined many other corporate investors to back Capstan Therapeutics Inc.’s $102m Series A financing in 2022. Capstan is looking to address multiple therapy areas, including oncology, inflammation, fibrosis, and blood diseases, with mRNA-encoded CARs and gene editing. 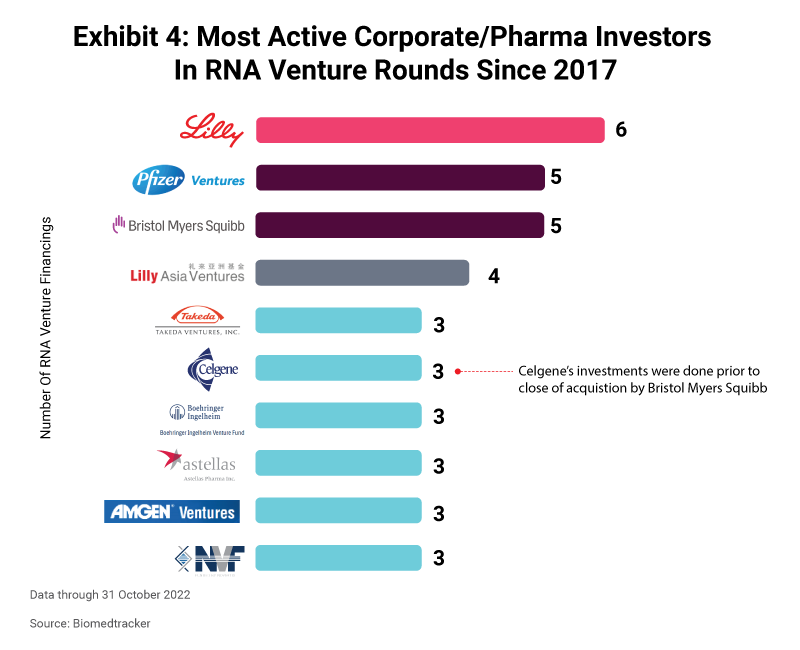 Licensing and collaborations to enable progression in RNA development is another form of investment that industry players have leveraged. RNA partnerships have steadily gained traction, reaching a high of 60 deals in 2020 after steadily increasing in volume since 2017. Annually, average deal values for most years has fallen in the $600–800m range, but in 2018 the average ballooned to over $1bn thanks to the aforementioned Lilly/Dicerna deal, as well as a potential $4bn agreement between Janssen Pharmaceuticals Inc. and Arrowhead Pharmaceuticals, Inc. around ARO-HBV, an RNAi therapy (now called JNJ-3989) for HBV.  (Also see "RNAi Partners Vie To Lead Race To Cure Hepatitis B" - Scrip, 4 Sep, 2020.)

Notably in 2022 so far, the average partnership value is trending on the higher side, at $857m. Looking ahead to the rest of 2022 and beyond, some of the biggest investments may go into novel RNA technologies if the latest partnerships are any indication. The most expensive deal of 2022 to date focuses on circular RNA (circRNA). Merck & Co., Inc. may pay Orna Therapeutics, Inc. up to $3.65bn in up-front and milestone fees for development of circRNA-based vaccines and therapeutics in infectious disease and oncology. Orna has been well funded by venture investors as well, raising over $300m from its Series A and B rounds. CircRNA may have many advantages over linear RNA, including resistance to exconuclease degradation and better stability. Even so, circRNA is very much a nascent field, with only eight therapies in the pipeline. All of the drug candidates are currently in preclinical studies, with CirCode being the most active at four therapies in development.

In another big money deal in 2022, Beam Therapeutics Inc. will use its mRNA and lipid nanoparticle technologies to deliver in vivo based editors to treat rare liver, muscular, and genetic diseases. That agreement resulted in partner Pfizer Inc. paying $300m up front and potentially another $1bn in milestones.

An additional area of excitement in the RNA field are self-amplifying mRNAs, which have the potential for reduced dosing and longer protein expression. In early November 2022 (just past In Vivo’s data cut off), Arcturus Therapeutics Ltd. signed a deal worth up to $4.5bn granting CSL Seqirus rights to use its self-amplifying mRNA technology for development of COVID-19, influenza, and respiratory infectious disease vaccines.  (Also see "CSL Licenses Arcturus mRNA Technology, But COVID-19 Vaccine Remains Uncertain" - Scrip, 2 Nov, 2022.)

Volume is generally low in RNA-focused acquisitions – only a total of 21 have been done since 2017, making it difficult to understand trends over time. Even with the small numbers, it is worth noting a shift: A greater number of companies in the mRNA space – including mRNA vaccines and therapeutics, and mRNA cell-based therapy – have been targeted for acquisitions, while fewer companies involved in RNAi have been bought recently. This increased concentration on mRNA acquisitions is yet another result of the success that the industry has seen with mRNA vaccine development, which has trickled into investment in mRNA therapies.

Looking Ahead In RNA Investment

There is strong reason to believe that the momentum gained in recent years with investment in RNA medicines will continue for the foreseeable future, as advances are made drawing increased venture funding. Peer-to-peer dealmaking between smaller biotechs in RNA has been the norm, but many multinational players have already signed deals, and the expectation is for the trend to increase. The current environment is encouraging, but similar to other advanced therapies like cell and gene therapies, the question still remains how commercially viable the RNA market will be, considering the investment in research, development, and manufacturing while ensuring that patients eventually have access to these life-saving medications.

The Top Five Pharma Stories Of 2022

RNAi Partners Vie To Lead Race To Cure Hepatitis B