The Misalignment Of Pharma Pipelines

Portfolio decisions for pharma pipelines are multifactorial, although patient need perhaps does not get the attention it merits. Rather, the gravitational pull around risk, investment return, and regulatory incentive tilts the pharma pipeline toward overconcentration in hot therapy areas. 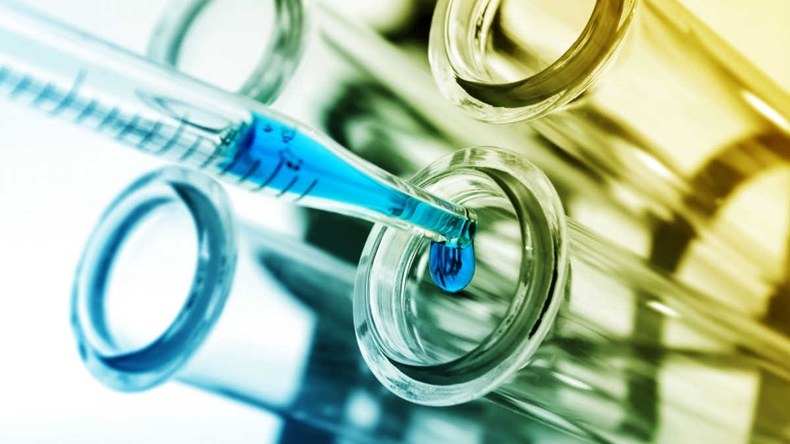 Countless factors go into the decision-making processes underpinning how biopharmaceutical companies build their portfolio. Scientific validation, clinical risk, commercial opportunity, competitive intensity are uppermost, alongside the benefit to patients. The most established – or indeed idealistic – companies, which can afford to swallow risk and diversify across a broad portfolio, will say that unmet need is the fundamental driver for all decisions. Solve for patient necessity and the other considerations will fall into place as a result.

Yet, pharma portfolios and drug pipelines are heavily molded by scientific, commercial, and indeed regulatory practicalities. The objective quantification of unmet need at a global level, both geographically and within the spectrum of all human diseases, is lacking. Clearly pharmaceutical companies are commercial entities and must carefully navigate through this puzzle, but any movement to provide health equity will need the industry’s full cooperation.

The World Health Organization (WHO) publishes its estimates on the leading causes of death and disability, which can be compared to the pharmaceutical industry’s pipeline, as originally explored by McKinsey earlier this year. Exhibit 1 takes this concept further, encompassing all major therapeutic area (TA) categories found in Pharmaprojects, expanding the scope to include smaller drug developers, and remapping more accurately to the WHO diseases. The two datasets are largely consistent in terms of classification, although it is worth noting the disability-adjusted life year (DALY) estimates are for 2019, contrasting a 2022 view of the pipeline. Considering the length of time required to progress new drugs into clinical trials, this slight lag is arguably justified. 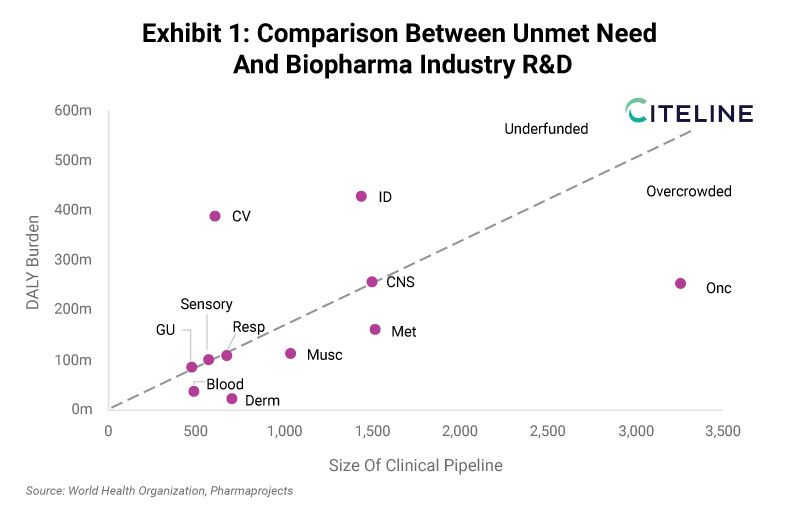 While the line of best fit is arbitrarily placed, it is useful in communicating which TAs are overpopulated relative to the size of disease burden, and those for which pharma R&D funding does not match the potential benefit. Oncology is the clear outlier in terms of the size of industry pipeline, with almost 3,500 active clinical-stage assets being deployed against a group of diseases that collectively carry far less burden compared to infectious diseases globally (250 million vs 425 million DALYs). Rather, the unmet need is equivalent to central nervous system (CNS) diseases, whose pipeline (~1,500) appears to be proportionately sized for the therapeutic challenge.

The common immunology and inflammation (I&I) diseases within dermatology and musculoskeletal also fall into the overcrowded space, as do blood disorders/hematology. Metabolic conditions can be classified similarly, although considering the overlap and dependencies between diabetes, obesity, and cardiovascular complications, then this is partly a result of definitions. Co-morbidities aside, cardiovascular is the TA that is least well served by the industry’s current pipeline. The patient burden is among the greatest at 400 million DALYs, but with a pipeline of just over 600 drugs. Infectious diseases are also firmly in the underfunded space, but the field has made great strides forwards, as revealed in the next exhibit.

It is also worth noting that even within TAs, there too are imbalances and contradictions. For example, when breaking down CNS into its composite psychiatric and neurological indications, mental health accounts for around two thirds of overall patient burden. Yet, looking at industry pipelines, the balance of R&D investment falls in the opposite direction. Large pharmaceutical companies have largely exited psychiatry research as standards of care are low-cost generics, while many avenues of research are yet to produce new antidepressant, anxiolytic, or antipsychotic drug classes.

Pharma R&D Has Distorted In The Last Ten Years

Both the WHO disease burden and Pharmaprojects industry pipeline databases can be queried longitudinally, which provides a useful window into trajectory and momentum. DALYs are also available for 2010, and so the consistent comparison is to measure against the 2013 pipeline view. This is plotted below in Exhibit 2. 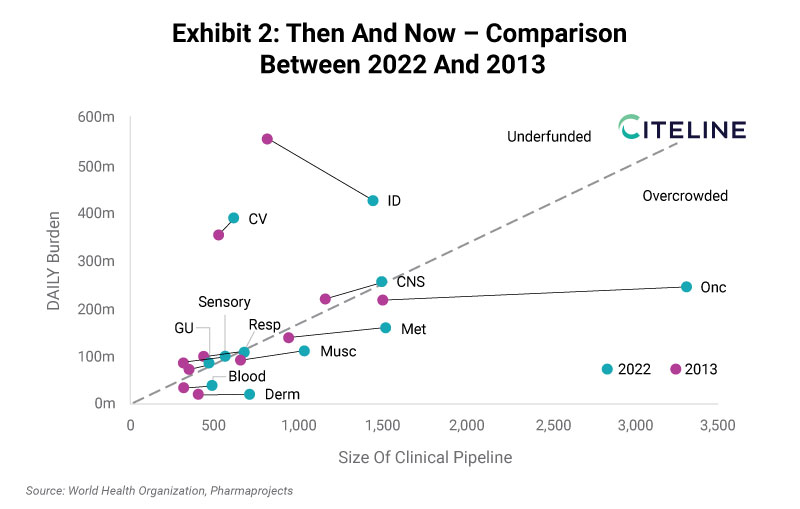 With this view, two industry-wide conclusions can be drawn. The first is that pipelines have generally shifted to the right, indicating growth. In total, there are 70% more drugs in development in 2022 compared to 2013, which is a good sign for commitment to R&D spending. The second observation is that DALY burden is generally flat for this subset of diseases that the pharma industry is targeting with pharmaceuticals. This is an even more positive sign, considering that the global population has expanded from approximately 7 billion to 7.7 billion between 2010 and 2019.

Some diseases have seen total burden decrease by a considerable amount. The most striking change is within infectious diseases, with overall burden declining from 550 million DALYs to 425 million. While industry investment in clinical development of novel anti-infectives has grown over this time, the large improvement in overall population health can largely be attributed to improved access to treatments in low- and middle-income countries. R&D is not always the rate-limiting step in terms of improving patient outcomes, especially when looking at the spectrum of diseases at a global level.

Certain cancer indications have also seen tremendous improvements in the standard of care in the last decade, although with few truly curative pharmaceutical treatment options, DALY burden has generally risen. Considerable unmet need still remains, in spite of the incredible growth in the Oncology pipeline seen in Exhibit 2. The main surprise here is the reminder that Oncology was once part of the pack with comparable levels of investment as the other main TAs. The successful cancer companies over the last decade have been richly compensated for their clinical success, and attention should now turn to ensuring these advancements translate into improved patient outcomes, distributed equitably.

The type of analysis that seeks to equitably distribute healthcare spending across diseases will become more commonplace as healthcare costs continue to rise, placing pressure on finite budgets. The UK’s National Institute for Health and Care Excellence (NICE) has long-provided a model for cost-effectiveness analysis, setting reimbursement of drugs against a consistent cost per quality-adjusted life year (QALY) gained framework. The influence of the US’s Institute for Clinical and Economic Review (ICER) is only growing.

More immediately, the reality of being in hypercompetitive TAs with limited prospects for reducing patient burden will reshape the commercial equation. There are fewer and fewer opportunities to secure the coveted first-in-class or best-in-class drugs that provide a lucrative return on investment. Furthermore, the scientific and clinical risk in R&D is being redefined not only as the likelihood of approval, but more accurately to encompass the likelihood of reimbursement.

At some point, the winning portfolio strategy will be divergent and contrarian, eschewing the intensely competitive therapeutic opportunities in favor of investments anchored around unmet need. For an industry that has a reputation of risk aversion and fast following, this would represent a huge shift in thinking. As to when this becomes the right move, it is simply a question of timing.