It is time for In Vivo's 14th annual Deals of the Year contest. We've selected 15 nominees across three categories – Top Alliance, Top Financing and Top M&A – and you get to pick the winners. 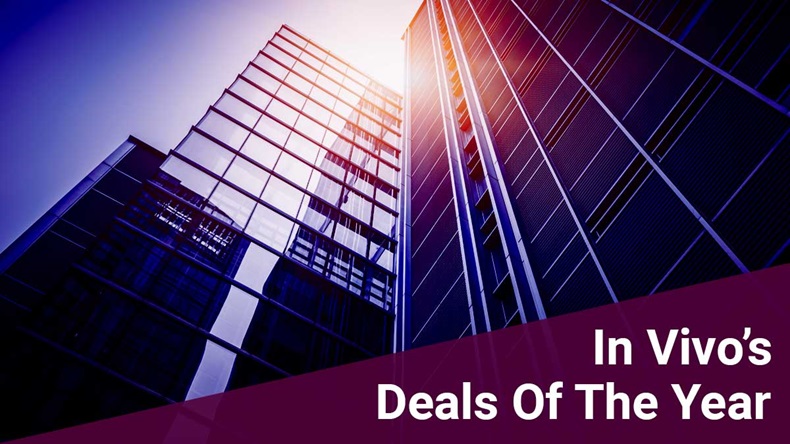 In Vivo's editors, along with experts from the Informa Pharma Intelligence team, have selected our top five picks for the most significant M&A, alliance and financing deals of 2021. Vote now in the polls below.

Ionis Pharmaceuticals, Inc. and AstraZeneca PLC engaged in a strategic cooperation agreement to develop and commercialize eplontersen, Ionis' experimental antisense medication for the treatment of transthyretin amyloidosis (ATTR). ATTR amyloidosis is a rare, progressive disease characterized by the abnormal build up of amyloid deposits composed of misfolded transthyretin protein in the body’s organs and tissues. Ionis and AstraZeneca will share responsibility for medical affairs and commercial efforts in the US, while AstraZeneca will have an exclusive licence for eplontersen outside the US, apart from some Latin American nations. Ionis received $200m upfront and will see up to $485m more in conditional payments after approvals. AstraZeneca is also set to pay up to $2.9bn in sales-related milestones assuming sales thresholds between $500m and $6bn, as well as royalties ranging from low double-digits to the mid-twenties depending on the region. (Also see "AstraZeneca Boosts Rare Disease Pipeline With Ionis Antisense Candidate" - Scrip, 7 Dec, 2021.)

Recursion Pharmaceuticals, Inc. formed a partnership and licence arrangement with Roche Holding AG and its Genentech division in 2021 to use technology-enabled drug discovery via the Recursion Operating System (OS) to uncover novel targets and create therapeutic small-molecule programs in gastrointestinal cancer and important areas of neuroscience. Recursion will collaborate with the R&D groups of both Roche and Genentech to use technology-enabled drug discovery via the Recursion OS to uncover novel targets and develop medicines more quickly in critical areas of neuroscience as well as a cancer indication. Recursion received a $150m upfront payment and will be eligible for future performance-based research milestones. Roche and Genentech may begin up to 40 projects together.  If developed and commercialized successfully, the deal could result in more than $300m in development, commercialization, and net sales milestones for Recursion, as well as tiered royalties on sales.

In 2021, Novartis AGbecame the latest big pharma to join the fray for the development of TIGIT (T Cell Immunoreceptor with Ig and ITIM Domains) therapies. In December Novartis announced it had signed an option and license deal with Chinese firm BeiGene, Ltd.. for ociperlimab (BGB-A1217), a TIGIT inhibitor in late-stage development for solid tumors including lung cancer. The Swiss firm will pay $300m upfront plus a further $600-700m if the option is exercised before late 2023.  Beijing-based BeiGene is eligible to receive up to $745m in regulatory approval milestones and $1.15bn in sales milestones and royalties on future sales of ociperlimab in a similar group of licensed territories as its previous collaboration with Novartis back in January 2021. At that time, BeiGene granted Novartis rights in North America, Europe and Japan to develop, manufacture and commercialize the anti-PD1 antibody tislelizumab, which is pending US approval with a prescription user fee action date of 12 July 2022. From January’s initial collaboration through to the December expansion, Novartis is also eyeing new cancer drug launches in China through the BeiGene tie-up. Under the broad alliance, BeiGene will market, promote and detail five Novartis oncology drugs: Tafinlar (dabrafenib), Meninist (trametinib), Votrient (pazopanib), Afinitor (everolimus) and Zykadia (ceritinib). (Also see "Novartis Expands BeiGene Tie-Up To TIGIT Inhibitor In $1bn-Plus Option Deal" - Scrip, 21 Dec, 2021.)

5. Touchdown And Olympus Team Up On Venture Fund

Olympus Corporation announced the launch of Olympus Innovation Ventures in November 2021, a new, multi-year investment fund designed to support early and growth startups developing digital, diagnostic, and medical device solutions. Olympus seeks to partner with startups by offering clinical and technical expertise, access to health care professionals and hospitals, and assistance launching and scaling novel solutions in the global market. It has allocated $50m for initial commitments and follow-on investments in portfolio companies. The venture fund is stage-agnostic. Touchdown Ventures, a firm specializing in corporate venture capital, will help manage the Olympus Innovation Ventures fund. Touchdown will work closely with senior executives of Olympus in all aspects of operating the fund.

Centessa Pharmaceuticals plc launched in early 2021 with a first-of-its-kind model and $250m in series A backing. The new company was created through the merger of 10 private biotechs, which will sit under the Centessa umbrella as subsidiaries. Headed up by a couple of industry heavyweights, and founded by UK life sciences venture capital firm Medicxi, the company’s goal is to create a new R&D model which cuts the inefficiencies faced by big pharma due to structural constraints. Saurabh Saha, former Bristol Myers Squibb Company head of R&D, took the helm as CEO, with ex-GlaxoSmithKline plc R&D chair and outgoing Operation Warp Speed scientific head Moncef Slaoui appointed as chief scientific officer. In October 2021, Centessa also revealed it had entered into a financing agreement with Oberland Capital Management LLC that could bring the multi-subsidiary firm as much as $300m in debt financing, bringing the company’s cash balance to more than $900m. (Also see "Centessa Looks To Transform Drug Development With ‘Asset Centric’ Model" - Scrip, 18 Feb, 2021.)

Exscientia Ltd., a University of Dundee spin-out founded in 2012, concluded its upsized initial public offering on NASDAQ in October 2021 that raised gross proceeds of $350.4m, up from the original forecast of $304.7m. Over 15.9 million American Depositary Shares were sold at $22.00 each. The Oxford, UK, headquartered company, which has offices in Miami and Osaka as well as Dundee, also sold nearly 7.3 million shares at $22 in a concurrent private placement to Softbank and the Bill & Melinda Gates Foundation, raising another $160m. The fresh injection of over half a billion dollars comes on top of the $525m previously brought in last year through a series D financing in April and $100m from a series C in March. Exscientia is currently advancing more than 25 projects, including the first three AI-designed candidates to enter the clinic, one developed internally, and two molecules from Sumitomo Dainippon Pharma Co., Ltd (Also see "The Inexorable Rise Of Exscientia" - Scrip, 6 Oct, 2021.)

Sana Biotechnology, Inc. made its NASDAQ debut in 2021, obtaining $546.4 million in an upsized initial public offering of 27 million common shares (including the overallotment) at $25 apiece. Sana had intended to issue 15 million common shares for $20 to $23 apiece. The company's treatments are used to treat cancer, diabetes, as well as CNS and cardiovascular illnesses. The proceeds from the IPO will be used to fund its in vivo and ex vivo cell engineering platforms (including the completion of preclinical studies on each candidate and the advancement of at least three in vivo and three ex vivo candidates through human proof-of-concept); continued development of manufacturing capabilities for its product candidates; continued development of its product candidates; and for R&D activities focused on advancing and broadening the scope of its ex vivo and in vivo cell engineering platforms.

In 2021, Rectify Pharmaceuticals, Inc. secured $100m in a series A funding round co-led by Omega Funds, Atlas Venture, Forbion, and Longwood Fund. Positive functional modulators (PFMs), disease-modifying precision medicines for patients with genetic illnesses caused by mutations in ATP-binding cassette (ABC) transporters, are being developed by the start-up. ABC transporters are a family of 48 membrane-bound proteins whose mutations induce etiologic loss of functions in a variety of organ systems, including the gastrointestinal tract, liver, eye, lungs, and central nervous system. Rectify intends to utilise the revenues from the investment round to fund its initial human proof-of-concept investigations.

Less than three months after Redwood City, CA-based PROCEPT BioRobotics announced an $85m series G financing round, it offered 6,556,000 shares of its common stock at a public offering price of $25 per share for total gross proceeds of $163.9m. Procept’s common stock began trading on NASDAQ on 15 September under the ticker symbol PRCT and opened trading near $39 a share. Procept markets the AquaBeam device, an image-guided, surgical robotic system that uses the company’s proprietary Aquablation technology to create a thin jet of water that can precisely cut tissue. It is currently indicated as a minimally invasive alternative to open surgery for the treatment of benign prostatic hyperplasia. (Also see "Procept BioRobotics Seeks $164M To Go Public" - Medtech Insight, 16 Sep, 2021.)

The year's largest biotech deal: Merck & Co., Inc. (known as MSD outside of the US) acquired Acceleron Pharma, Inc.for around $11.5bn. The deal was completed in the fourth quarter of 2021. Through the deal, Merck will expand its cardiovascular portfolio and pipeline. Acceleron's lead asset is sotatercept, an investigational medication for pulmonary arterial hypertension, a rare and frequently deadly cardiovascular illness. Sotatercept could be the first disease-modifying drug for PAH. The primary completion date for the pivotal Phase III STELLAR trial of sotatercept in PAH is December 2022, but two additional planned Phase III studies to support label expansions for the drug have not been initiated. Merck said when it announced the deal to acquire Acceleron that it anticipates launching sotatercept in the US in 2024 or 2025.

Exact Sciences Corp. entered into an agreement to buy Thrive Earlier Detection Corp.. for cash and stock consideration of up to $2.15bn in a move to strengthen its position in the emerging multi-cancer screening market. The deal closed in January 2021. Exact, the company behind the Cologuard stool-based colorectal cancer test has been upfront about its aspirations to be leader in the multi-cancer screening market. Thrive has developed CancerSEEK, a blood test to screen for multiple types of cancer. CancerSEEK detects the presence of circulating tumor DNA and protein expression and has a machine-learning classifier to optimize test performance. It was first developed at the Vogelstein Lab at Johns Hopkins University. (Also see "Exact Goes All-In On Multi-Cancer Screening With $2.15Bn For Thrive; $410M For Base Genomics" - Medtech Insight, 28 Oct, 2020.)

Sanofi acquired Translate Bio for $3.2bn in 2021, firmly nailing its colors to the mRNA mast. Sanofi's efforts to develop innovative vaccines and therapies using mRNA technology will be accelerated because of the acquisition. And Sanofi's mRNA Center of Excellence will benefit from the agreement, which will investigate the potential of enhanced mRNA vaccines as well as other crucial areas such as immunology, cancer and rare disorders. Translate Bio functions as an indirect, fully owned unit of Sanofi as a result of the purchase. (Also see "Sanofi Goes All The Way In mRNA With Translate Bio Buy" - Scrip, 3 Aug, 2021.)

Amgen, Inc. finalized its $1.9bn acquisition of Five Prime Therapeutics, Inc. for $38.00 per share in cash in 2021. Five Prime's lead candidate is bemarituzumab, a first-in-class medication that targets FGFR2b, which is overexpressed in roughly 30% of patients with HER2-negative gastric cancer and other solid tumours. Amgen's international expansion plan was also aided by the purchase. The company wants to pivot its focus to the Asia-Pacific area where gastric cancers are prevalent. Amgen expects to see strong volume increase in the coming years. (Also see "Amgen Paying $1.9bn For Five Prime And Its Gastric Cancer Antibody" - Scrip, 4 Mar, 2021.)

The Inexorable Rise Of Exscientia

Sanofi Goes All The Way In mRNA With Translate Bio Buy

Exact Goes All-In On Multi-Cancer Screening With $2.15Bn For Thrive; $410M For Base Genomics